New Babylon at a Glance

What if monsters were real?
Not as abominations lurking in the shadows… but cunning predators hiding in plain sight?
Influencing every aspect of our world in ways we would never dare to imagine?
What if you became one of them? 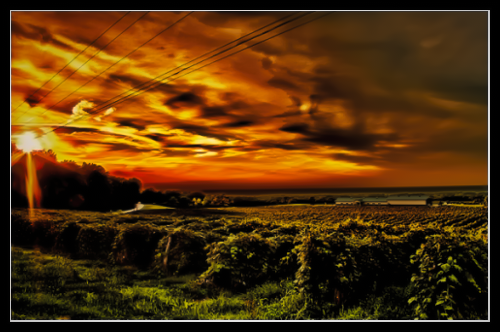 Napa Valley is the ultimate wine country, with over 500 wineries dotting the picturesque valley. Just 30 miles long and 5 miles wide, Napa Valley has the perfect climate, soil, and topography to harvest legendary Chardonnay and Cabernet Sauvignon wines. Beyond wine, Napa Valley is a transformative utopia with gourmet dining, deluxe lodging, and modern culture. Welcome to wine country paradise!​
It reigns as the land of grand estates, expansive tasting rooms, quaint towns, and elegant lodgings, many of which edge up to the celebrated Silverado Trail. Roughly an hour’s drive north of San Francisco and boasting more than 400 wineries, Napa Valley is a connoisseur’s paradise, inviting visitors to explore beyond the region’s signature Cabernet Sauvignon and Chardonnay. Don’t miss, for instance, the rediscovered Merlot, whose plush texture and earthy cherry flavor are appealing to a new generation of red wine fans.

Long considered California’s most famous wine region, Napa Valley exploded into the global spotlight following the 1976 Judgment of Paris, when a Chateau Montelena Chardonnay from Calistoga trounced nine other Chardonnays in a blind tasting in Paris, including extremely prestigious bottles from France. At the time, France was considered the world’s forerunning wine region, but this triumph forever changed the international perception of Northern California’s wines.

Today, the region boasts some of the most coveted wine grapes anywhere, including To Kalon Vineyard, planted in the 1860s, plus contemporary cult bottlings like Screaming Eagle and Harlan Estate.

The region is a great place to visit throughout the year, as each season in Napa Valley has its charms. Spring’s emerging grape leaves turn hillsides brilliant green, plumed with golden swaths of mustard blossoms. Summer warms up with events and festivals (and their attendant crowds), so plan on packed schedules. Fall brings the crush, as vineyards and wineries bustle with workers. Winter settles into a cool hush: Insiders know this is a time to snag reservations at Napa Valley’s galaxy of Michelin-starred restaurants, shop for holiday gifts in gaily decorated but quieter towns, and relax in greater intimacy at posh spas.
Caine
1st Generation
Animalism (10), Auspex (10), Celerity (10), Dominate (10), Fortitude (10)
Obfuscate (10), Potence, (10) Presence (10), Protean (10), Thaumaturgy (10)​ 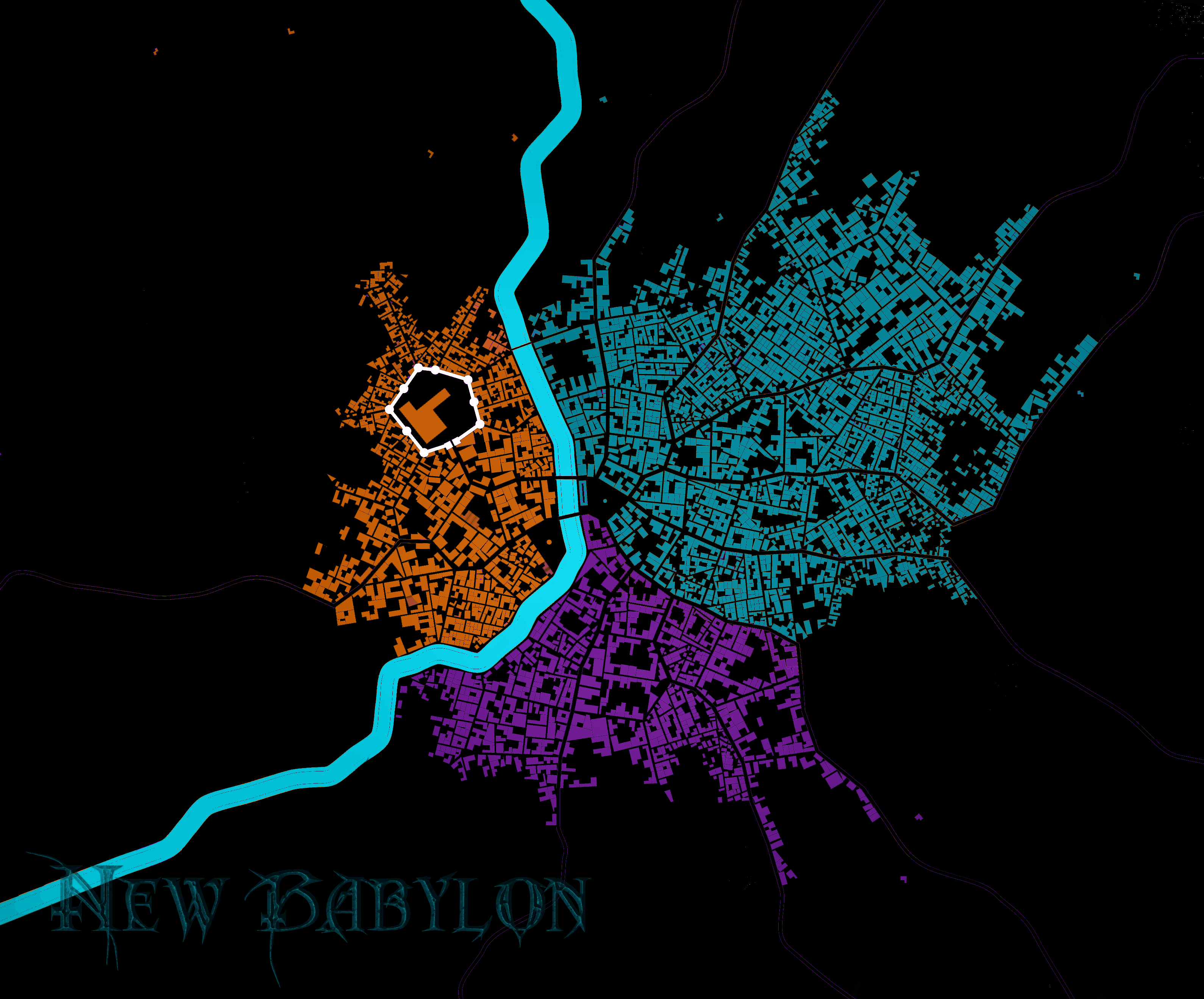 SETTING
In the formerly unincorporated community of Stanley, in Napa County, California lies the city of New Babylon. At an elevation of 20 feet, it is located on the Birch River, a man-made tributary flowing into the Napa River, roughly four and a half miles north-northwest of Napa Junction.

[IMAGE]​
Fortescue​
Fortescue is where Vindicta calls home, harkening back to the Old Norman epithet Fort-Escu or "strong shield". Sir Richard Le Fort, a Norman knight and Cupbearer to the Duke of Normandy. He participated in the Norman Conquest of 1066, and tradition maintains that he protected William the Conqueror with his shield at the Battle of Hastings.

The neighborhood itself was built with defense, and military might in mind with several fortifications in place so as to fend against any threat - foreign or domestic. The architecture is modern with influences from the Romans and Grecians.

A sole tower, that of a skyscraper, is the only building erected at it's height of 100 feet. It stands as the domain for all of Vindicta's activities, at the heart of the Fortescue neighborhood. The neighborhood's dwellings are all of exquisite taste and built with only the finest construction materials available. From single story lofts to the mansions that line the streets, whatever your desire need only be chosen.

Ocala​
The neighborhood of Ocala derives its name from Ocali, the Timucua Indian name for the province of Florida through which Spanish explorer Hernando de Soto passed in 1539, its literal meaning is unknown.

It is the home of the Concordia, whom share it with the mortals of this world. Stone, and steel structures dominate the neighborhood, taking influence from the very region it is named after - Ocala, Florida. From Classic Revival to Tudor, Mediterranean, Georgian, Colonial, and Queen Anne Revivals - you'll see it all. Lined with moss-draped oaks, and stately Southern homes. Local agricultural activities include cultivation of fruits, vegetables, peanuts, and livestock raising.

Salem Heights​
This neighborhood, named after the Salem Witch Trials of Salem, Massachusetts, is the property of House Tenebris. Fitting, as they are the literal phoenix rising from the ash - just as the Salem witches were in their day.

Sharing some of its architecture with that of Ocala - Salem Heights enjoys First period, and Federal architecture, as well as Greek, Queen Anne, Gothic, and Colonial Revival styles - as well as the Victorian Gothic style. It is a very historic neighborhood with many museums dedicated to several disciplines - from art to history and in between.

Hillcrest Ridge​
Hillcrest Ridge consists mainly of single-family rambler homes and duplex homes with the predominant architecture influence being American Craftsman bungalow, Federal Revival, Mid-Atlantic Colonial Revival, and Tudor Revival. The aesthetics and quality of the structures are generally excellent, equal to those of an upper-middle-class neighborhood.

Meadow View​
House Erebos calls this neighborhood their home - that of Meadow View.

Sporting the most extravagant architecture and designs of all the neighborhoods, attributed to the fact that they are House Erebos - from post-modernism to high-tech architecture, or highly conceptual and expressive styles, resembling sculpture on an enormous scale Meadow View has it all.

St. Francis Village​
The part of New Babylon known as St. Francis' Village is one of the poorest and most destitute parts of the city. Home to the castaways of society, the deviants, the miscreants, it is not safe to travel St. Francis' streets at night. Murder, rape, perversion, all find a home here in St. Francis. No one willingly goes to this part of town, not without ulterior motives.

It is why Maledictus calls this place home.

Here, away from the thugs of Erebos and wailing preens of Concordia, Maledictus can go about it's business. It's business of undermining the city from within, to bring down the entire house of cards and see Erebos' world in flames. And business is good. Having a hand in almost all the illegal activities in the village, Maledictus has their claws on the throat of the undercity, letting them see all that happens. Many a beggar on the street has been ignored and forgotten, and many of the beggars are the eyes and ears of Maledictus.

With extremely low property values and access to any vice one can think of, humanity can be found in abundance in the Village. Though no sane mortal will ever willingly call St. Francis' Village home, many do so because they can not afford anything better. No silver towers and gilded homes for those lost in the ranks of humanity here. Those that do come here, are usually on their last legs. Though a few do come in with malice a forethought, Maledictus will be ready for them.
Caine
1st Generation
Animalism (10), Auspex (10), Celerity (10), Dominate (10), Fortitude (10)
Obfuscate (10), Potence, (10) Presence (10), Protean (10), Thaumaturgy (10)​ 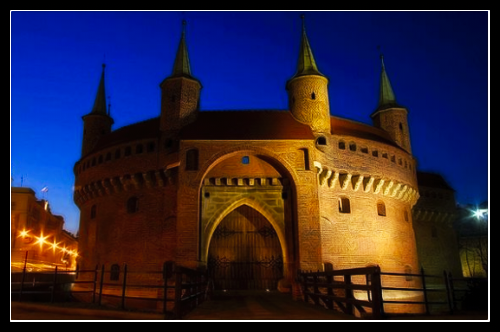 Bastion of St. George [CONCORDIA - Ocala District]​
The neo-Gothic styled bastion, built around 1898, is a one of a kind fortified outpost still standing in New Babylon, and one of the best preserved historical landmarks of the city. It is a moated cylindrical brick structure with an inner courtyard 25 meters in diameter, and seven turrets. Its 3-meter-thick walls hold 130 embrasures. The bastion was originally linking to the city's intricate web of underground passageways, spanning over 300 kilometers in combined length - although some of these tunnels have long since caved in and an effort to rebuild them was abandoned. 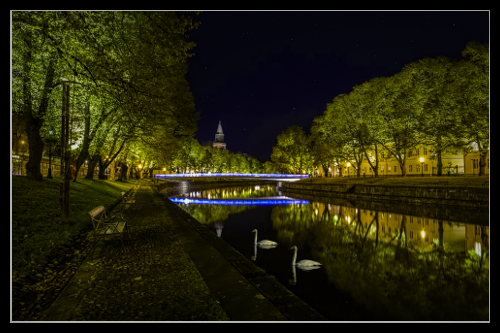 Waterside - Birch River
​
Waterside along the city's man-made tributary of Birch River is a system of sidewalks flanking the river as it weaves its path through New Babylon. With its many benches, swans populating the river and old trees flanking the pathways, Waterside Park is a popular destination for walking and hanging out. Many clandestine meetings can take place here at night, if you can stomach running into the unsavory Gangrel or Malkavian street gangs, rumored to frequent this place, after dark . . . 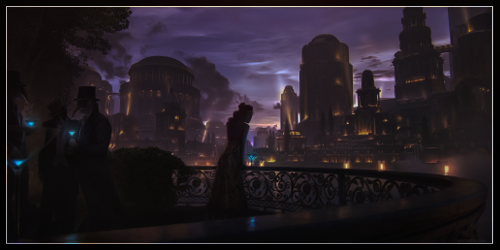 Downtown New Babylon
​
The splendid city of New Babylon, located along the waters of the man-made Birch river tributary flowing into the Napa River, is resilient, beautiful and mysterious, rising from the ashes of its ancient predecessor giving rise to something entirely new. The pleasure its current occupants enjoyed came at a price, however, since the highly desired New Babylon would always be seen as a prize for the taking.

The original Babylon city of old has resonated in Judeo-Christian culture for centuries. The books of the Old Testament recount the exile of the Jews to Babylon following the sack of Jerusalem, by whose waters they “sat down and wept.” By the 21st century, the city to echo the sentiment of its past and original glory had become a potent symbol: the corrupt earthly twin city to the pure, heavenly New Jerusalem.
Caine
1st Generation
Animalism (10), Auspex (10), Celerity (10), Dominate (10), Fortitude (10)
Obfuscate (10), Potence, (10) Presence (10), Protean (10), Thaumaturgy (10)​